Hey there readers! As you already know, I was right in the middle of another brew day when I last posted, so obviously it's time to post about the next beer! I am very excited about this one, as it is a sort of concept beer. I find that concept beers help creativity by giving brewers different parameters to explore in each recipe. This is why I love doing things like single-malt and single-hop (SMaSH) beers, hybrid styles like Belgian IPA and Belgian mild, and high-quality session (less than 5%--in many cases less than 4%) versions of beers. Thusly, drawing inspiration from one of my favorite recipes, the Westminster Porter, as well as one of my favorite and oft-revisited styles, English mild, I formulated a recipe for a flavorful low-abv dark beer that will be quick to mature and perfect for early fall. Here's the husky lad, then:

Mashed trains at 154, then I realized that I had about

So I added it to the wort. It has a great flavor and should help the beer to have a nice dry, roasty finish.

Hop schedule is as follows:
1 oz East Kent Goldings (4.5% AA) @60 min
1 oz EKG @30 min
1 oz EKG dry hop (because why not...I love dry hopping beers even when it is minimal and the beer is malt-forward. The EKG character should make for a beautiful, balanced beer)

I had another excellent brew day, and ended up with beautiful wort the color of chocolate sauce that smelled and tasted of toasted bread crusts, coffee and sweet toffee. Fermentation is still going, but starting to slow down. WLP002 is very floccullent, and I cleared the beer with a whirlfloc tablet, so this should be a very clear, beautiful dark beer with those signature brown porter garnet hues. I can't wait to taste this one. I think it will be a recipe worthy of repeating, especially because of the low cost and sessionability. Anyway, we shall see! Until next time...cheers! 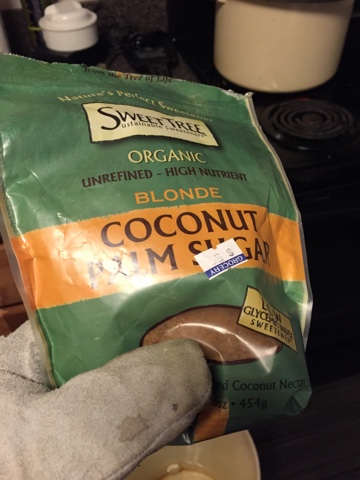 Posted by Jeffrey Paul at 7:34 PM No comments:

Well, I have just pitched the yeast for beer number two in Ewing, so I better get to posting about beer number one! My first brew day in the new apartment went great. The stove far exceeded my expectations in functionality (it is electric), and I ended up with a gorgeous, big golden Belgian beer. I brewed the beer on the autumnal equinox, and something about that just felt right. Here is the recipe I used:

WLP500 Trappist Ale yeast with 1 L starter on stir plate (which took off like a shot!)

Mash temp started a little high, so I added some ice and brought it down to target. My stove heated things up very quickly during mash and sparge, and even brought a full volume of wort to a rolling boil relatively quickly with no signs of scorching, so I'm very pleasantly surprised with my setup in the new apartment. At flameout, I added the pound of honey and let it steep before chilling the golden wort down to 68 degrees and pitching the WLP500 starter. Fermentation has been healthy and vigorous, and has slowed a bit but is still going along steadily. I'm hoping the beer will dry out appropriately with lots of spicy/fruity yeast character, and the honey should help with that while adding a nice floral subtlety to the beer. I also think the EKG character will be beautiful in this big, flavorful blonde ale.

Can't wait to see how it turns out...Prost! 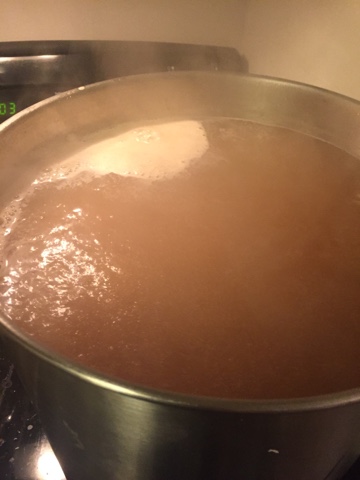 Post-move return to the game

Greetings, readers! It has been quite a while. After a couple of wonderful summer brews, including several repeatable highlights, a few factors led to a temporary hiatus, including lots of time away from home and a move to a new apartment (more about that in a second). While I have missed brewing a great deal, I am supremely excited for my next reboot. With the new apartment, I have enough room again for my homemade four-tap kegerator! Naturally, I had to plan out four brilliant batches to go on it first.
I wanted to do a few simple-but-wonderful explorations, with one really wild "homebrew"-style beer. As such, it's now time to play "One of these things is not like the others":
Belgian Honey Blonde: a classic exploration of a 6-7% abv flavorful Belgian blonde, but instead of the classic candi sugar, I will use honey. Honey is awesome and I love the floral subtleties it adds to beer.
"Mild Porter": a porter-inspired English mild, so named because it will straddle the line between robust mild and low-abv porter
SMaSH English IPA: a big ol' English IPA using only Maris Otter (my all-time favorite base malt) and East Kent Goldings. I bought my first-ever 1-pound bag of hops, because I will be using a great deal of EKG in the IPA, and I will also be using them in ALL FOUR OF THESE BEERS, so it will be a total EKG party.
PSL Stout: make fun if you want, but I love pumpkin beers, and I do crave a pumpkin spice latte from time to time when the air gets colder and crisper and the leaves start changing colors. This beer will be a coffee milk stout brewed with pumpkin and a potion of pie spices. I haven't been into making many crazy flavored things lately, mostly because I like the classic ingredients speak for themselves, but this idea just seemed too delicious to pass up. 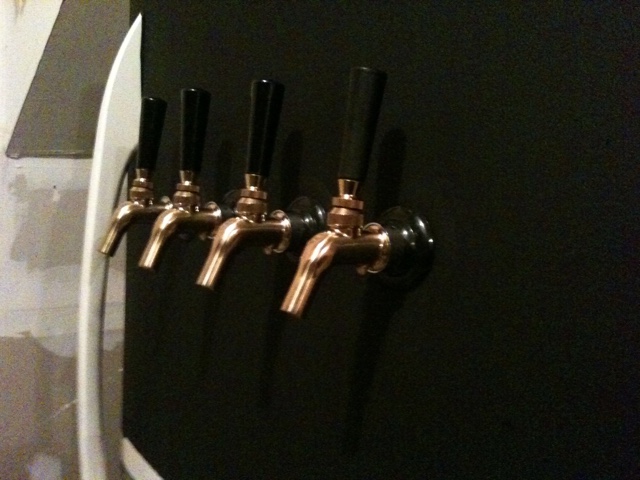 Return of the four-tapper! Woohoo!
Posted by Jeffrey Paul at 10:09 AM No comments: