This weekend, I sampled both the recently-bottled Sea Symphony Strong Ale (or Barleywine, but it's a little outside of style guidelines...and deliciously so!) and the young Saison de Potiron, and they were both wonderful and wonderfully surprising.  On Friday night, I tasted my 11.6%ABV behemoth of a beer, the Sea Symphony Strong Ale, hopped with Chinook, Falconer's Flight, and the Falconer's Flight Seven Seas (Cs) blend.  It was very lightly carbonated at this stage, but the taste was wonderful.  The beer had notes of honey, pine, burnt sugar, citrus, flora, apricot, with lots of warming and a beautifully sticky mouthfeel.  I am so excited to enjoy that wonderful beast of a beer over time.  It is probably my favorite beer I've ever brewed.

The Saison de Potiron is showing amazing promise.  The WLP568 yeast RIPPED through this beer.  It is already deliciously dry, in the proper farmhouse ale fashion.  The yeast profile will develop over time, but I am already getting the wonderful peppery notes, with fruity esters in the background.  It already has a delightfully "Belgian" taste to it, so that has me very excited.  There's a nice nutty caramel malt background, with the proper light, spritzy farmhouse ale body.  The pumpkin made it just about the most wonderful color I've ever seen.  Tawny, autumnal orange-amber.  Mmm...just delovely.  The pumpkin added that delightfully earthy, squashy note to the beer as well.

Wow, it is so exciting to be back in the game.  Scarlett the Galway Girl on tap right now...used it to make some ale grilled onions to put on a buffalo chicken pizza tonight...freaking delicious. 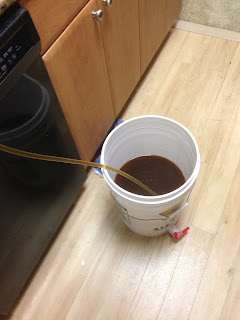 Saison de Potiron
As the weather grows colder and leaves change to their autumnal reds and oranges, we beer lovers need a tasty brew that can reflect the change in the season.  The Franco-Belgian style known as "Saison" (French for "season") is a relatively free-form style from the farmhouses of Belgium known for its spicy, complex, almost peppery yeast character.  The most common versions (Saison Dupont is the most popular) are around 6% ABV, dry and very light in color, with lemon and pepper notes.  However, it is now widely accepted that in the Franco-Belgian farmhouse ale tradition, the saison beer would literally change with the season, with the Saison Dupont style most prominent in the spring.  Summer meant brighter, more wheat-forward, lower alcohol saisons, while wintertime saw a hearty, darker, high gravity saison.  An ideal autumnal saison would be slightly higher in alcohol content, copper/amber in color, malt forward, and perhaps containing some beautiful fall pumpkin (potiron) meat.  As a homebrewer, I certainly couldn't ignore my inner mad scientist, and of course I had to go with the pumpkin option.  Thusly, I have named the beer "Saison de Potiron," which plays on the fact that it is indeed a pumpkin saison beer but also the fact that "saison de potiron" translated literally means "pumpkin season."

The recipe follows a grain bill relatively similar to a scotch ale.  I used Maris Otter, a base malt that I have been borderline obsessed with ever since I started brewing all-grain beer.  A Belgian brewer probably would not use MO (Pilsner malt is the most common base grain for Belgian beers), but I wanted that extra maltiness and depth for the beer, given the cooling weather.  The wort poured out a beautiful amber with bright orange hues in the background...ergo, this beer will be autumn in a glass.  Here is my recipe:

Normally, I would use the Saison Dupont strain to get the proper complexity going, but that yeast thrives between 80-90°F, and I just don't have those kinds of temperatures to work with anymore, now that it's September.  WLP568 yeast is said to have the traditional characteristics of the Dupont strain without the finicky nature and need for high temperatures.  This will be perfect for this time of year, and depending on how things work out, I may harvest the yeast and make it one of my "house" strains.  I have had such great luck harvesting and reusing yeast in the past, I definitely want to get into it again.  It saves a lot of money (about $7/batch) and gives me some consistency.  Also, there are a couple of strains (especially WLP002/Wy1968 for English ales, WLP300/Wy3068 for wheat beers, now a huge fan of WLP250 for American/clean ales) that are amazing for some of my favorite styles of beer.  I will use my next two batches of beer, this saison and my Belgian mild, to test Belgian strains and see what I want to have in house for brewing those tasty Belgian styles.  And now...brew day pics!


Posted by Jeffrey Paul at 4:33 PM No comments: 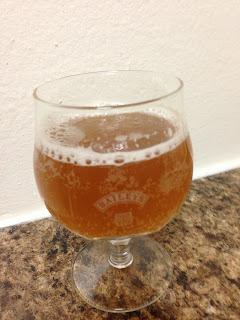 Ralph, or "Son of Sea Symphony"

Wow, now here is a beer that I kegged right as my CO2 was running out a year ago, and I never ever got to taste it!  If you remember from this entry, Ralph was an "American Bitter" that I made from the second runnings of the Sea Symphony Barleywine and hopped with Chinook and Falconer's Flight hops, fermented with a second generation pitching of the Rebel Brewer American Pub Ale yeast.  Now I will admit that a year later, I did not have high hopes for this one.  Hoppy beers are best enjoyed young, so that the fresh hop aromas are at their most potent.  This process, however, can be prolonged if the beer is put on CO2, which this one fortunately was.  I tapped the keg this evening, and out poured a beautiful golden/light amber hazy delight with a brilliant white head.  The aroma still held a citrusy, floral quality to it, with sweet malts in the background.  The flavor is bitter grapefruit and tangerine, pine, with an unprecedented malt sweetness and light esters.  Mouthfeel was medium body, spritzy, and surprisingly creamy. Overall impression of the beer is "How the hell is this only 4% ABV??" Tastes like a very smooth IPA with a solid malt backbone to it.  I think collecting the runnings of a bigger beer added some depth to this beer's maltiness.  I will definitely be doing partigyle brewing again.  You get so much bang for your buck and you end up with TWO amazing beers.  This makes me VERY excited to try the Sea Symphony Barleywine, which I will be bottling this weekend.  The bottles are currently in their sanitize cycle in the dishwasher, and I am really excited about not having to wash them by hand.

In the other kegs are the Limerick Session Stout (which I tasted and is also still delicious), Scarlett, the Galway Girl and the JuniorSenior RyePA, so we'll be rotating those into the kegerator as well.  Come by for a taste!

Prost!
Posted by Jeffrey Paul at 6:10 PM No comments: