Check out the poll

Hey all, I know it seems ridiculous to update three times in a day, but I just added a poll to the blog and I wanted everyone's opinion. Comment on this post if you need a definition of any of the styles.
Posted by Jeff Cutts at 9:05 PM No comments:

Thought I'd give my current detailed game plan on the next month or so of brewing, since the Weizenbock started its fermentation yesterday and I am already looking ahead:

2/12/11 Rack Der Winterweizen to secondary fermenter, brew Limerick Session Stout, a traditional Irish dry stout with nice roasty cocoa and coffee tones, with a decidedly crisp clean finish and ABV below 4%...delicious stuff that can be enjoyed without going off the deep end ;)

2/19/11 Bottle Der Winterweizen, rack Limerick Session Stout to secondary for clearing, and brew a small 2 gallon batch of Hogsmeade Mild Ale; a toasty-nutty, somewhat sweet, sessionable English-style brown ale also with an ABV below 4%, which means a lot of great beer without breaking the bank.

After spring break see what the bottle situation is...

Hey readers! Yesterday was truly a glorious day, as I brewed up a new batch of beer for the first time since August, and with a few equipment improvements. First off, the gracious Matthew Clark's stove is still not working, so I ended up doing my whole batch with my new turkey fryer...and it was great. My new digital probe thermometer told me when the temp was right, and the turkey fryer got the water and wort to the right temps so dang fast! My 170° strike water was ready in less than ten minutes, and my full 6-7 gallon boil of the wort came to a boil almost as fast. The cooler mash tun held the temps great, and the bazooka screen acted as a perfect filter. My runoff went totally smoothly, and my efficiency was around 67%, which is low-ish but not bad for my first time with new equipment. 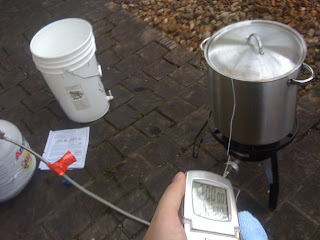 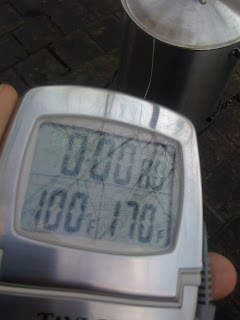 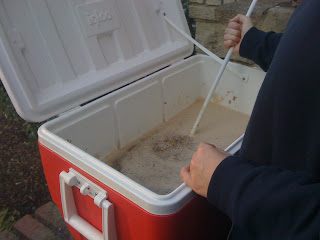 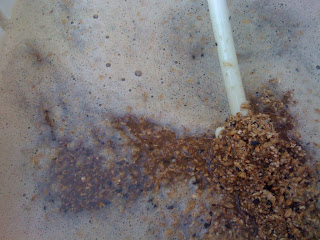 A closeup of the beautiful grain 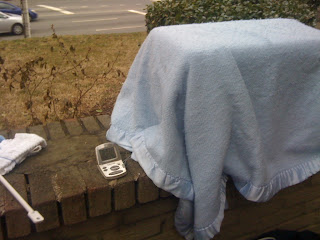 A blanket helps to insulate the mash tun 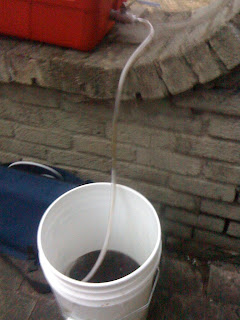 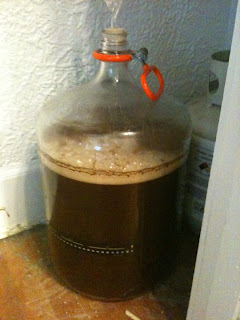 A healthy, foamy krausen forming on the beer (taken today by Herr Clark) 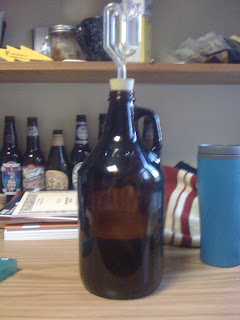 Here is the yeast starter that come tomorrow will be fermenting away at my weizenbock. I am really excited about it!
Posted by Jeff Cutts at 5:06 PM No comments:

I have a turkey fryer.

Count it. Hello Weizenbock!
Posted by Jeff Cutts at 3:09 PM No comments:

Outlook (because I can't stop thinking about beer)

I also received an insider's tip via HomebrewTalk.com to check out Rebel Brewer in Goodlettsville. Gotta check it out soon!
Posted by Jeff Cutts at 7:32 PM No comments:

I can't wait to get this guy going. Hopefully it will be *really* soon. Waiting for a few logistics to come through.
Posted by Jeff Cutts at 1:41 PM No comments: 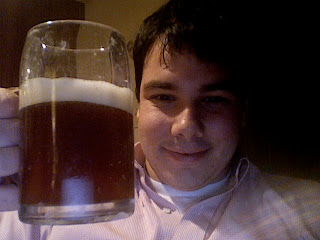 Hey readers! I have exciting news. Yesterday, I made my first visit to the Nashville homebrew store, called All Seasons. I successfully picked up ingredients for my next batch of beer, to be brewed within the next week or so! With the gracious hospitality of my good friend, Matthew Warren Clark, I now have a home for my brewing. Turns out, he has a perfect closet for storage of equipment and fermenting of delicious ales! So, in addition to the stuff for my first batch, I also got some equipment so that I can mash in a slightly easier, cleaner way. If you are at all curious about my new mashing setup, there is a link describing it here.

What is my first Nashville batch, you ask? Well, I thought that since the next category of brew that I was going to review was German wheat and rye beer, I should brew a wheat beer. The beer that I will brew is a Weizenbock, a dark, malty wheat beer with nice dark fruit and spice tones but with a cocoa-like character that differentiates it from Hefeweizen and Dunkelweizen. I am very excited about this guy. My recipe is a combination of Papazian and Zainasheff inspiration, weighing in at about 7% abv with lots of fruit, spice, and cocoa deliciousness. Fourteen pounds of delicious grain, two ounces of delicious hops, and Weihenstephaner Weizen yeast await me now.

The name? Der Winterweizen, in honor of the season and Franz Schubert.
Posted by Jeff Cutts at 3:37 PM No comments:

After browsing through an amazing beer selection in Newton, MA, I brought to Nashville a couple of excellent Belgians. I chose two good sours and a six pack of a Great Divide Brewing Co (Colorado) Belgian Saison. Here is my review of one of the sours...I didn't have time to take a picture because the beer was too delicious, so I found a stock photo of it online. After this, I promise to go back to the regular order of the styles, as well as chronicling my new Nashville brewing adventures! 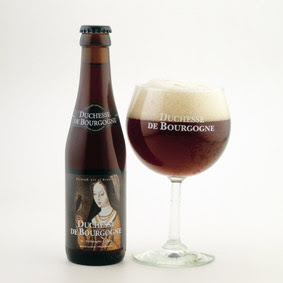 Appearance: Beer pours a deep reddish-brown with a fluffy cream-colored head that starts off big and dissipates into a small film on the surface, with some of the most amazing lacing I've ever seen

Aroma: Sort of a sweet, musty cherry smell with a slight tart kick and a little funk, not as much as expected though

Flavor: Delicious. Tart cherries up front with some nice raisin/plum sweetness balancing the whole thing out. Some definite malty tones stand out in this one...edging on the side of an Oud Bruin (even though BA classifies it as a red). A tiny amount of hop bitterness graces the finish. Great to see how the flavor opens up as the beer warms.

Drinkability: Amazingly drinkable, especially for a style that people seem to think is less accessible. I really enjoyed this a lot and could easily foresee drinking a whole bottle by myself. Great price, too! $10/bottle for something that is definitely as good as much more expensive ones.
Posted by Jeff Cutts at 12:22 PM No comments:

Last night, I was treated to dinner at The Russell House in Cambridge, MA. I knew going in that the restaurant had an excellent beer selection, so I was really excited to see what they had there. I was even more excited when Claire handed me a scrap of paper and a pen and said, "well don't you want to review them?" What a lovely lady :) Here's what I tried: 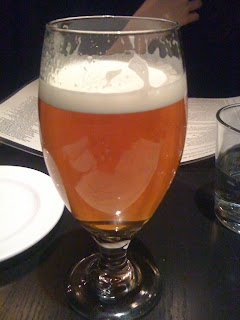 I should start out by saying that this beer was served on cask, which unlike keg and bottle beer is unfiltered (read: still some active yeast in there), unpasteurized, and served at cellar temperatures. What a treat, for few places in the US serve cask ale, and it is really a wonderful way to have fresh beer that is has a bit more character to it.

Appearance: Beer pours a pretty golden, light amber color with the smallest amount of haze and a nice smallish white head that leaves great lacing on the glass.

Flavor: Mmm, nice English hops, biscuity cereal grains, and a bit of yeastiness with a slight residual sweetness. Very much like the aroma, but better!

Drinkability/overall: Wonderful, drinkable ale that is a total treat to have on cask. Balanced and flavorful, yet simple and perfect. I have no idea how to get my homebrew on cask, but I'm going to have to look into it. I know that some people have done it. 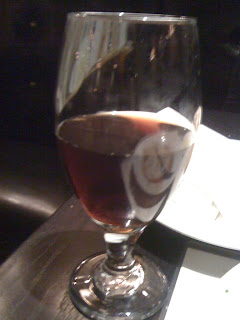 This style is just what it sounds like. It is a higher gravity, dark ale with the hop content of an American IPA. This style is very much in vogue this year, and this was the first time I had ever actually tried the style.

Aroma: toffee, coffee, a little roastiness and a hint of citrusy American hops

Flavor: lots of flavor, toffee and roasty espresso combine really interestingly with a decidedly citrusy hop flavor...great how this style of beer combines the dark toffee and coffee flavors with the very bright American hop flavor...very nice and balanced, quite enjoyable

Drinkability: This beer is balanced and flavorful, but it doesn't overwhelm the palate too much. It is definitely an interesting style that I would be interested in brewing this year (especially since all the cool kids are doing it)

Posted by Jeff Cutts at 9:15 PM No comments:

It has been a couple of weeks since I have updated, and I have a couple of reasons for that. When I came home, a few of us tried the fabled Hot Chocolate Stout. It showed great promise (in fact, the aftertaste was wonderful), but some flaw in the process caused the beer to be contaminated, which left a soapy, salty, and unpleasant twang on the tongue upon tasting. Well, I got my first bad batch out of the way, and hopefully it will be smooth sailing now. I'm not giving up, especially considering how outstanding my other batches were, and I'm definitely going hardcore on my sanitation for the next batch. I was able to finish up the RyePA, which was still really quite tasty. There was also some English Mild that I had left in a growler in the fridge at the end of the summer that was miraculously still carbonated and tasted great. So it's not all negative stuff, and I have a really positive outlook as we enter 2011. I am bringing my equipment down to Nashville and plan on taking TN by storm. Would definitely be open to suggestions for the "comeback" batch! (I am leaning towards BowThai Ale 2.0)

Best,
Jeff
Posted by Jeff Cutts at 9:05 PM No comments: