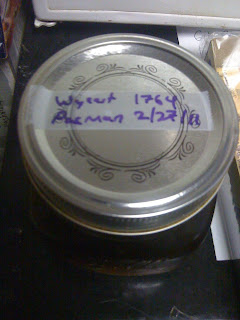 Forgot to mention that yesterday, I performed a successful washing of the Wyeast 1764 (aka Rogue's signature Pacman yeast) that I used in the stout. Honestly, it is such a good strain of yeast for anything requiring a neutral fermentation that I heartily look forward to using it again. For those of you that either chose not to follow the link to the yeast washing page or are still confused about what I did yesterday, here goes:

1. I racked my stout into the bottling bucket for bottling. Once I racked it, there was a yeast cake left in the bottom of the fermenter.
2. I put sanitized water into the fermenter and gave it a swirl.
3. I decanted the yeast in the fermenter off of the coagulated protein gunk (trub) at the bottom and put it in a large container.
4. I decanted the yeast in that large container off of the remaining trub and into four small jars.
5. Basically, I was able to harvest the yeast from this batch so that I can use it again. Pretty exciting since Wyeast 1764 is a seasonal strain that's not always available, liquid yeast in general is pretty expensive ($6-7), and the yeast I harvested should stay viable for close to a year!

Pretty cool. After sitting in my fridge overnight, the jars have fully separated into beer/compact yeast cake. When I'm ready to use one, I need only decant MOST of the beer off the yeast cake, give the jar a swirl, then pitch the yeast into a yeast starter (probs with a little yeast nutrient). I will probably do this pretty soon, as I'd like to use the same strain for the BowThai Ale!
Posted by Jeff Cutts at 3:54 PM No comments: 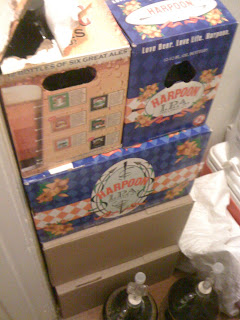 Today, we finally got around to bottling the weizenbock and the stout. So excited for both of these beers. The stout was wonderful and already supremely drinkable, and though the weizenbock was still a little heavy on the alcohol in the flavor, it is showing delicious promise and should be ready in another 2 weeks or so. We'll definitely be drinking the stout some over spring break, so that's exciting! I'll let the mild just chill out for a while, and then we'll bottle and taste it after break. Won't do it any harm. Get pumped for some good stuff over the course of the next month, because I have the equivalent of 96 bottles of beer conditioning and aging right now. Booyah.

-the Tennessee brewman
Posted by Jeff Cutts at 11:15 PM No comments: 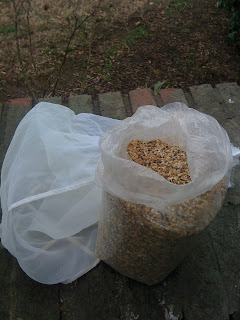 Yesterday was a funny kind of day, because I had a really nice plan to brew a small, 2 gallon batch of mild ale using slightly different methods than usual that would hopefully require less cleanup than usual. Little did I know that my plans would totally backfire on me (well, not totally, but you get the idea).

Instead of doing my cooler mash as usual, I decided to just mash in a grain bag in my 5 gallon pot and batch sparge as usual. This would leave the grain nice and contained and wouldn't require me (or Claire) to spend the tedious time cleaning out the cooler mash tun (which both of us are getting better/faster at, but it's still somewhat of a pain especially with nowhere to compost the grain, which is the ideal way to dispose of it). Anyway, I figured that since I was just mashing in my pot anyway, why not just put the grain bag in and bring the pot up to heat, right? Wrong. Well, it would have worked had I not tried to BLAST the heat and bring it up to mashing temps as fast as freaking possible. After about a minute, I noticed a burning smell in the air. Then I noticed grain floating up from the bottom of the pot into the water. Oh shit. I had burned a huge hole in my grain bag.

I removed the bag from the water, transferred the grain and water into my large pot, and proceeded to heat it up again (slowly this time), stirring the grain constantly to prevent any scorching. Basically, I got it to my desired mashing temp, but even with insulating the pot, temps seemed to be all over the place in the pot during the mash as I moved my probe thermometer around, even with copious stirring. Now, I assume the thermometer was just freaking out a little bit, but I still am not totally sure how consistent my temps were. Every time the temp went down too much, I would fire up the burner again to even the temp out. This caused the center to be really hot (sometimes upwards of 200°F), but it would even out again once I stirred the whole thing. I really only had to fire up the burner about 3 times throughout the hour-long mash, because my pot holds temps pretty well. After that, I had to lauter and sparge by using a lot of creativity, but I managed to get the grain and such out of the wort, so that was good. Basically, I'm really interested to see what the body/flavor/ABV of my beer will be like because of all this. I am hoping that my odd shotgun methods will give it the depth of character of a decoction mash beer, and I am hoping that the burnt grain bag will create no more than just a light smokiness in the beer, but alas I won't know for another week. Whew, so there's my story.

I ended up with just under two gallons of wort at the end of the boil, and I pitched an even amount of WLP 002 into the my two gallon jugs. The sweet, unfermented wort did taste pretty good, so I am really hoping that this brew day will create a delicious mistake à la Toll House when they invented the chocolate chip cookie. You never know, if this beer is a total revelation, I just might have to repeat all of the crazy stuff from this brew day to recreate it authentically. Or I might have to settle for adding a little peat malt and doing a real decoction mash...

Well, it looks normal, right? In fact, I ended up with a damn pretty brown color: 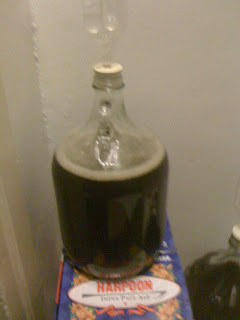 At the end of brew day, I was exhausted and ready to just call it a day, but I decided to take some samples of the stout and weizenbock. Holy schnikees were they good. The stout tasted amazing for only a week in the fermenter (that was sort of the point of a low gravity stout), not to mention already being nice and clear and the weizenbock...let's just say for its ABV I can't believe it's tasting this good being this young (three weeks fermenting right now). The stout had some amazing mocha flavors with a great clean finish, and the weizenbock basically tasted somewhere along the lines of fruity chocolate chip banana bread, with some nice warming from the alcohol content. They were SO GOOD! I offered tastes to my host, Mr. Matt Clark, and even though he was in the shower I insisted he try them so I shielded my eyes and passed him the tasting cup. He was thoroughly impressed and all of a sudden quite excited to be paid in beer for his hospitality. This makes me really excited to bottle and drink these beauties. Stay tuned for the release of these wonderful ales!

First taste of the weizenbock...

...was hardly a taste, but I did drink about a shot of yeast-saturated beer from the bottom of the carboy after the siphon and it tasted pretty damn good so far. Can't wait to get a true taste of that one because I think it'll be awesome. Bottling that one in a week then aging for 2-3 more weeks. Should be wonderful.
Posted by Jeff Cutts at 9:42 PM No comments:

Email ThisBlogThis!Share to TwitterShare to FacebookShare to Pinterest
Labels: glimpse 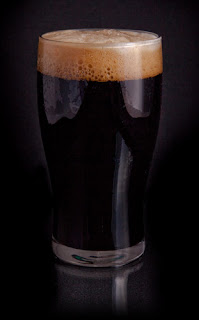 
This weekend has blessed us with warmer temperatures and bright, sunny days, so I have had the opportunity to brew yet another excellent batch of beer! Saturday afternoon, I began by racking (siphoning) Der Winterweizen into a secondary fermenter. It will sit in that carboy for about another week, and by next weekend it should be ready for bottling. Thus, with my primary freed up I was able to get my second batch of 2011 going. If you remember correctly, this batch is an Irish dry stout of low gravity that should be ready to drink within about two or three weeks. Brew day went really well, and I was joined by a couple of extra friends this time who helped me in the brewing process. While Claire was a big help as usual, my good buddies Ben and Victor were good hands in the latter part of the brewing process as well.

A few things went even better yesterday than two weeks ago, not the least of which was my efficiency increasing. I think this was partially due to my doing a mashout (raising the wort to 168° at the end of the mash) and letting the batch sparge water actually sit for 10 minutes to absorb all of the sugars. Cleanup was well delegated and more efficient, too, and I think that we'll have the system down really soon. My one beef was still with the mash temperature. I realize now that I need to well overshoot the temp for my strike water and let it get down to the actual strike temp after I have poured it into my mash tun. This way, I won't end up with a lower mash temperature (and a lighter bodied beer) than what I want. I was able to raise the temp up with some boiling water, though, so the body of the beer shouldn't suffer. I also clearly got full conversion, because my starting gravity was even higher than projected. All is working well and I will have mastered my new system very soon.

Stay tuned for next week when we bottle Der Winterweizen, rack the stout into secondary for clearing, and brew a 2-gallon batch of English mild in honor of Hogsmeade Weekend!