I am now totally legit.

Two days ago, I made a serious advancement in my brewing. I finally brewed my first all-grain batch of beer (I say "finally", but this was really just my fifth batch of beer...hard to believe!). For those of you who aren't brewers, I'll break it down for you:

-Beer is made by fermenting sugars that have been extracted from the complex carbohydrates in grains
-As a homebrewer, one can simply buy this "malt extract" in dry or syrup form, boil it with water and hops for about an hour, and produce excellent beer
-Instead of just buying malt extract for this recipe, I just used grain to make the beer, converting the complex carbs into sugars myself...this process is known as "mashing" and the whole process (including the boil) takes closer to 3 hours
-Because I have complete control over the grain content of my extract, I have a huge amount of control over the finished product of the beer, more so than if I just used extract
-This means better, fresher, more original beer (think eating natural, locally grown food instead of packaged stuff)

This means that in about a week and a half, we'll be pouring pints of my all-grain original recipe English Mild off of the faucet! I am so excited to taste it! As soon as the mild goes from the carboy to the keg, I'll be brewing another all-grain batch, an APA known as the Ballardvale Pale Ale. That'll give me time to fully ferment and then dry-hop that batch while we are enjoying the English Mild. Should be great! 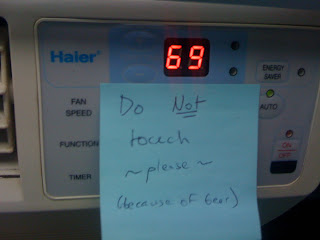 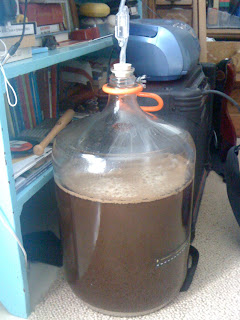 My beautiful brown mild bubbling away!
Posted by Jeff Cutts at 4:15 PM