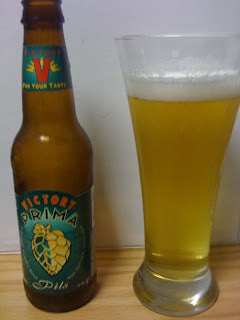 No, not the gross "Pilsner" that Budweiser, Miller, Coors all pretend to be. Pilsner is a beer that finds its origins in the Czech Republic, Plzen to be specific. I have already tried and enjoyed some versions of this category (Pilsener Urquell, Sam Adams Noble Pils), so I decided to give a shot to one I had never had before.

Aroma: bready malts, some biscuity cracker notes and bright, floral Saaz and German noble hops, a little yeast and some definite sweetness on the nose

Taste: definite hop bitterness here, lots of floral and even some citrusy notes (may have some American hops in there?) - hops definitely dominate but there is a nice mild pilsner malt sweetness that lingers in the background. Slightly on the dry side, with a very clean finish.

Overall: Lots of good impressions on this beer! The German pils style is a bit hoppier than the Bohemian/Czech style which I also really enjoy, but it is still very balanced. In many ways, I feel like this beer had some of what I felt was almost "missing" from the helles...essentially, a nice hop profile to go with the classic German malt flavors.

Personal: It has been a little while since I have had a good pilsner, and this was a nice surprise to me. The Victory Pils was a nicely balanced beer with a good malt profile and great hop flavor. I'm not a really big lager drinker, but I really enjoyed this beer a lot with its interesting flavors and incredibly clean finish. As I look into the future of my homebrewing, I would love to explore the pilsner style (since I already have some lager experience...yes!) and brew at least one of these a year. Basically, I am quite impressed with the style and would love looking into it a little more.