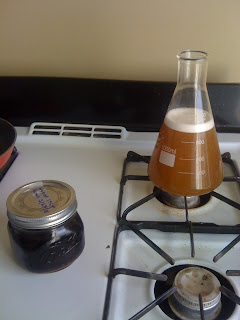 After the weeks of graduation hustle and bustle, I am finally able to get in a brew day again!  Yesterday, I got the yeast starter going (first yeast starter in the new apartment), which was much easier on a gas burner than on the McTyeire electric stove.  I made use of another one of my Rogue Pacman re-harvested yeast cultures, which was a little slower to start than the previous (yeasts lose some of their viability over time, so cultures that have been sitting around for awhile can be slower to start, but once they start going they're as good as when they're new), but sure enough was really moving by this morning.  I got a lot of satisfaction out of the $7.00 that I saved on this batch, which is high gravity and therefore slightly more expensive anyway.

My other mission yesterday was buying a whole truckload of Falconer's Flight hops to give this batch the amazing hoppy flavor for which it calls.  I also got my next recipe, a Belgian Table Beer similar to this one for summer that has got me really excited.

Basically, your average American Amber Ale (Fat Tire, Red Seal, etc...there are MANY) will have a nice hop character similar to an American Pale Ale, along with a little more caramel malt flavor to balance it out and an ABV of around 5%, of course with a beautiful reddish color.  The brew that I'll be churning out tomorrow is inspired by that tradition, but has been amped up in the style of a West Coast Red Ale and then turned up even a bit more from that style, meaning higher ABV (mine should land at around 7.5%) and LOTS more hop character.  Think IPA (India Pale Ale) when compared to a pale ale...bigger, bolder, hoppier.  This beer will be similar to a double/imperial IPA in strength and hop character, but with a lot more caramel sweetness and malt background.  Stay tuned for brew day highlights and the recipe to be posted on this blog tomorrow!