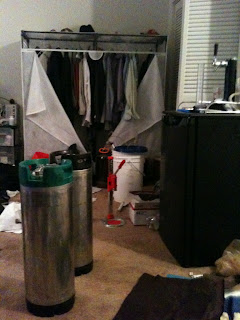 Today may have been one of the most productive brew days I have ever had.  I was really just hoping to make it out of this day having brewed the Irish red and used the yeast cake from the Limerick Session Stout I just brewed.  I was more ambitious though, and I managed to keg the stout, brew the Irish red and pitch it onto the stout's yeast cake, secondary/dry-hop the JuniorSenior Rye Pale, and harvest the Rebel Brewer American Pub Ale yeast from it.  I was also able to sanitize the other one of my kegs and seal it up for when it's time to fill it.  I even bottled off a bit of the 1839 Westminster Porter to save for when I go home to MA.  The picture encompasses nearly the whole brew scene that went on today.

This is getting me geared up for St. Patrick's day, and I'm really hoping that by then I'll have the new fridge up and running!

I'm thinking this will be a really nice beer.  The wort tasted great and I love the character of Willamette hops!  Probably because they possess all the good qualities of English hop varieties, but with that extra little zing of the citrusy American hop varieties, thus being a sort of ultimate hop for many American taste buds.  I feel sort of the same way about Mt. Hood, for the same reasons [but with German noble hop varieties].  The great thing is that I will be growing these varieties [along with Cascade] this summer in New Jersey, which will be a really fun project that will hopefully [perhaps by the end of the following summer] yield some great results  that will be usable in my beloved homebrew.