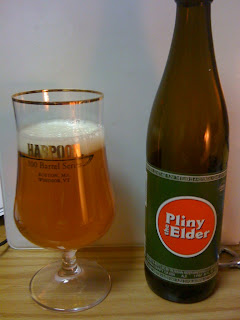 IPA is a very hoppy, high bitterness, high hop flavor, high hop aroma ale with a strong malt backbone to balance out all of that hoppiness. This style originated when English troops were stationed in India, and they wanted to have an ale that wouldn't spoil so easily. Hops act as a natural preservative in beer, thus a hoppier style of beer was born.

Imperial IPA is a bigger still version of IPA, bigger in pretty much every way, including ABV. Pliny the Elder is pretty much the definitive version of this beer, and is, according to beeradvocate.com, one of the best beers on the planet. This beer is brewed in California and is very sought after and rather difficult to find. I acquired a bottle by *somewhat* questionable means and had been looking forward to drinking it quite a bit. I celebrated my finishing of grad school applications by drinking this beautiful beer.

Appearance: a lightish, pretty golden color with a small but persistent head and EPIC lacing. EPIC.

Aroma: holy moley. I could just stop right here. Complex hop aromas with gorgeous American citrus and floral notes with a very prominent tropical fruit character, particularly pineapple-like in nature. what a treat to even just smell this beer.

Flavor: just like the aroma, with American citrus and pineapple flavors jumping out with amazing complexity, and huge hop bitterness that is beautifully balanced out by the malts in this high gravity beer. for a beer that is so big in flavor, it is amazingly balanced, and incredibly complex. I am officially blown away.

Mouthfeel: really not much like anything I've experienced before. Medium body and medium-high carbonation, but it seems that it is either the high gravity, the copious amount of (dry) hops, or some combination of the two, that gives the beer somewhat of an oily feel to it. Once again, I am pretty wowed.

Overall/Drinkability: not much that I can say that hasn't already been said. This is a truly amazing, world class beer and I am a huge fan. I can only say that I wish it was more easily available away from the west coast...and this beer definitely is PURE west coast stuff. The tropical fruit/pineapple flavor and aroma are what really blew me away here. Not like anything I've ever really tasted before. Can't wait for the day that I can have one again. I'll be sure to share it with my dad, Jeff Cutts, Sr. who is a huge fan of IPAs and other hoppy beers!

Good news about this one is that the brewmaster of the Russian River Brewing Company who brews this beer has actually published a homebrew-friendly recipe for a clone of the beer. I will definitely have to partake of that very soon (12 ounces of hops in five gallons!!!).