Let me begin by saying that last night, I spent a good deal of time drafting a brew day checklist, a sort of play-by-play of the day, to ensure that the process was calm, efficient, and producing the best quality possible. It worked. Never have I felt so calm or sweat so little on brew day.

It was a beautiful Nashville morning when I began brewing today at 10 a.m.; mid-sixties, sunny, good brewing weather. So I brewed up the second coming of the BowThai ale, this time going all-grain instead of partial mashing. SO MANY GOOD SMELLS with the ginger, fresh crushed coriander seeds, coconut and basil. My efficiency was great (one SG point better than expected!) and the color of the beer is dead on. Siphoning the wort off the trub was a chore and a half because (we found out later) a basil leaf got stuck in my autosiphon. May as well use an old-fashioned racking cane and prime it with water next time to minimize clogging. So we ended up having to pour the last of the wort into the fermenter and we probably ended up with a bit more trub than desired, but we wanted to get our 5 gallons worth (we had about four at the clog) and I know from experience that it won't affect things to much, particularly with this recipe.

The whole thing went so smoothly that Claire and I decided that we had time to bottle the Hogsmeade Mild Ale, which had been fermenting for the better part of the last month and we had just never got around to it. The first taste of the mild ale was very nice; a tad sweet, a bit of toffee, a hint of chocolate, but nicely woody and earthy with a silky mouthfeel (must've been the oatmeal!). I think it'll turn out very nicely. Today I used Cooper's Carbonation Drops to carbonate it because I had a small batch, and they were wonderfully convenient for my first time using them. Here is a bottle of the mild now conditioning by way of a carb drop: 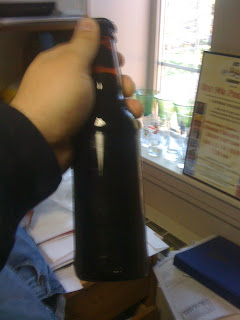 In fact, things were going SO well today, and I "just happened to have two gallons of apple juice and a packet of S-04 around," that once I had siphoned the Hogsmeade Ale into the bottling bucket and cleaned/sanitized my two one-gallon jugs, I got a small batch of cider going while waiting for the bottles to finish in the dishwasher. Aww yeah. Great thing about it was that it took almost no time at all. This will be an experiment, hopefully one worth repeating. Here sit the beautiful jugs o' cider: 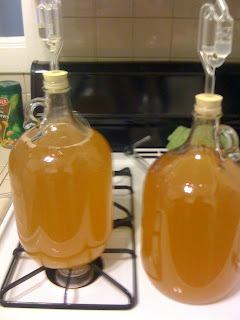 Over the next week, I will keep the jugs of fermenting cider in my room, then bottle them immediately once they have reached the sweetness/dryness level that I want (I'll be testing them over the week). My goal is to get something semi-dry to semi-sweet, probably similar to Strongbow and a bit drier than Woodchuck, but not really a far cry from either. Once it's to my liking, I'll bottle it with more Cooper's Carb Drops, then once it is carbonated to my liking, I can actually pasteurize it on the stove top and stop fermentation. This way, the remaining simple sugars in the juice (which yeast pretty much won't stop munching on) will stay there and leave us a mildly sweet, fruity apple character in the cider. I'm really excited. If anyone is curious, the first experiment has been done with Mott's (any 100% apple juice with no preservatives will do, and many experienced cider/cyser/apfelwein makers often will just use what's cheap).

Phew, well that's it for now. Lots of exciting stuff going on. Three different beers in bottles, BowThai in primary, and a small batch of cider in the works, I'd say that today was pretty awesome. Stay tuned for cider updates, as well as updates on the progress of the BowThai ale and the taste verdict on the carb-drop-bottled English mild.