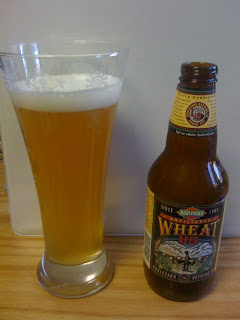 This is an interesting category that has required a bit of searching, as a lot of these beer tend to emerge around summertime. They tend to be very refreshing, fresh tasting beers meant to be drunk cold, and they tend to be tamer in flavor and thus are good "gateway" beers for people that are used to drinking the mass produced, flavorless junk of BMC (BudMillerCoors). These beers are *generally* fermented on the cooler side of ale temps (low 60°s) and then aged cold (34-50°). Other beers in this category include American Blonde Ale, Cream Ale, and Kölsch (I saw a bomber of French Broad Brewing Co of Ashville, NC's "Gateway Kolsch" in Fido this afternoon and was VERY tempted). American wheat beers tend to be cloudy like German hefeweizens, but without the phenolic/estery banana/clove character. They tend to have more hop flavor and a different yeast character. Harpoon UFO Hefeweizen is a really good example of this style, and a good one from my homeland. Well, here goes!

Flavor: Ooh surprising! Very fresh in flavor...this is actually very much like a German hefeweizen without the banana and clove esters. Definitely a light, tangy, lemony zip as the aroma would suggest. Great wheaty malt profile. Very low bitterness but some definite detectable hop character that certainly enhances the character. I am trying to pick up on the yeast character...there definitely is some, and it adds a nice touch to the beer (stuff is obviously unfiltered for a reason) but it is a really mellow yeast. I probably am just expecting the big character of a German weizen yeast. Stuff is certainly not "neutral," though. Overall, there are a lot of surprising, nice things going on in this beer! Lots to pick up upon but nothing overwhelming--very accessible "gateway" flavor.

Mouthfeel: High, fine-bubbled carbonation. Definitely effervescent. Not overdone, though. Body is on the higher side of "light bodied," and nicely smooth. Probably some oats in the grist. Very weizen-y.

Overall: I am very glad to have some of these early categories, some of which I am less familiar with, surprise me for the better. I have had some versions of kölsch and American hefeweizens, but I guess I didn't know much of what to look for in them, and maybe the ones I had weren't as enjoyable as this one, which I thought was actually quite good. Sam Adams Summer Ale is the same style, and I think that the Boulevard is a much better, more appealing beer that still satisfies that refreshing factor--pretty cool since people tend to really like Sam Summer! I see no reason to while away a hot summer day with a Bud Light when you could have one of these guys...they're pretty tasty and very refreshing.