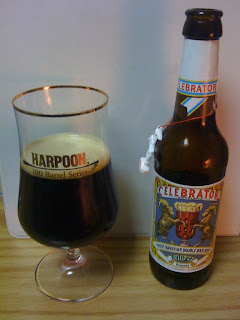 Mmmm, bock. Translated into English the word "bock" actually means "goat" in German, thus one will often see goats on bottles of bock, or dopplebock. Bocks are big German lagers, and dopplebocks are REALLY big German lagers. Bocks can be light (Helles/Mai bock) or dark (dunkel). The history of dopplebock is even more specific than bock beer, and it goes back to the Paulaner brewery when it used to be a monastery. The monks of Paulaner brewed the first known dopplebock, called "Salvator" so that they could maintain some level of nutrients in their system during their fasting seasons, particularly lent. Ever since then, this beer has been brewed by other breweries as well, often still with the "-ator" suffix to pay homage to the original. Thus, if you encounter a beer called Terminator, Alligator, Masturb- ahem....you've probably got a dopplebock. Ayinger Celebrator is one of the highest regarded versions of the style.

Appearance: SUPER dark. Almost opaque until you hold it directly up to a light, at which point you see some red and brown tones buried deep within. Small but beautiful and perfect tan head. Sticky lacing. Generally a beautiful beer.

Flavor: BIG complex flavor: raisins, figs, and dates accompanied by dark, natural sugars. Very similar to the aroma. Strangely enough, less alcohol in the flavor than in the aroma. Really balanced sweetness, not cloying. A definite perceptible roasty bitterness that is more like the crust on a good loaf of dark bread than like coffee or chocolate. Delicious bready malts round out the flavor (give us this day our daily bread...).

Mouthfeel: Beautifully smooth, with a medium-full body. Not quite as "chewy" as I was expecting from such a high gravity, malty beer, but I think that the real mouthfeel is much more pleasant than a giant, thick one that just bogs the drinker down. Matches up perfectly with the flavors.

Overall: What a wonderful beer. I have tried other dopplebocks, and this is almost definitely the one that I have enjoyed the most. The complexity of it is incredibly exciting to the palate and begs me to come back for more. Very drinkable for a big beer, because the whole thing is really very balanced. This is definitely not a beer that you would reach for on your average trip to the beer store, but it is a wonderful treat for a special occasion and definitely a great warming winter beer. Would be a perfect beer to sip by the fire on Christmas Eve while watching the snow fall. Ahhhhhhh...
Posted by Jeff Cutts at 8:07 PM