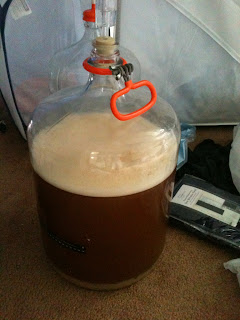 Well folks, I'm a couple days late with my update, but I brewed up my latest batch of beer this past Friday night.  I recently posted the recipe, and as I said, this was intended to be a smoky brown ale.  I finally got a new probe thermometer as my previous one had malfunctioned, and everything went great with the mash.  I hit the temperature dead on and only lost about two degree over the course of the hour, even with the cold weather.  The only weirdness came when I collected the runnings, and saw what appeared to be a rather light-colored wort.  I didn't think much of it, but after I ran the boil and tried to make it nice and vigorous to get some extra caramelization/color, the wort was still very light colored.  Beginning to get somewhat suspicious, I went into BrewPal on my phone and calculated what the recipe would be without the half pound of chocolate malt that I planned to have in there.  Welp, turns out that without it, I would end up with a beer of only about 11° Lovibond, almost exactly the light amber color that my beer appeared to be.  Methinks that Joe from Princeton Homebrew accidentally left out the chocolate malt, which incidentally was the last ingredient listed on my malt bill.  Oh well, it should still be really tasty, particularly given the rest of the malts in there, the lovely EKGs, and the WLP002 yeast, which has a great profile.


Mulling things over, I got a sort of crazy idea.  I thought to myself, "Gee, if I carbonate this beer naturally with malt extract, I'm just making a small amount of wort...why couldn't that wort be colored, flavorful wort?"  Well, I won't be kegging this one until after Thanksgiving, so I have time to think about it.  I do, however, really want this to be a brown ale, and I also have about 9-10 ounces of Carafa I in my stock right now.  I'm kinda leaning towards using that when I carb the beer.  If you are a homebrewer and have any knowledge from other folks/your own experience doing this, let me know your thoughts.  I really don't see how it would affect the beer negatively, seems like it would just be along the lines of carbing the beer with really dark DME.  Well, we'll see!  In the meantime, the beer is fermenting at a happy 66° [at 64° ambient], and it should come out great no matter what I decide to do with it...part of the joy of being a homebrewer is in the process and the unknown.