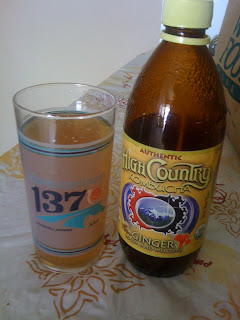 To begin with, I was at the Whole Foods in Nashville so that I could get some preservative-free dried apricots to use in my Belgian Christmas Ale, as well as do some nice casual browsing, something I always like doing.  Right before I left, I saw a fridge case full of kombucha (and a few other chilled items), and I decided that it was high time I tried some.  For those who do not know, kombucha is a mildly fermented tea beverage (with just trace amounts of alcohol basically) believed to be a sort of superfood with amazing health benefits.  Thanks to the wealth of information on HomebrewTalk, I had already developed a genuine interest in making kombucha because it sounded interesting and it is relatively easy to make (not to mention drastically less expensive than buying it).  Well, I am drinking it right now and on top of just being "interesting," it is delicious.  It's very hard to describe the taste...but it's sort of like a tart, mildly sweet, mildly carbonated (no doubt due to fermentation) iced tea with a little bit of vinegar/funk in the nose.  The one I got is ginger flavored, and I think that that lends a wonderful character to it.  Now I'll definitely have to look into making some.  Basically, it's as simple as buying a bottle of commercially made kombucha and building up a "mother" culture from it (ends up looking like a gelatinous rubber pancake that floats on top of your fermenting tea), which is apparently not too difficult.  You can read more about making kombucha here (one of my favorite homebrew blogs), or there are a bunch of good YouTube videos about making it.  Cool!

Brewing up my Belgian Christmas ale tomorrow.  I'm singing in church so I'll set up my mash early in the morning, stabilize the temperature, and then leave it while I'm gone.  This longer mash time will likely result in a good efficiency and is a great option for anyone who wants to brew but has to work or whatever.  I'll update you on how it goes.
Posted by Jeff Cutts at 7:26 PM